This listing is being maintained by its rightful owner.
Activities & Attractions
0.0 0 Reviews
Submit a Review The Academy Palazzo Ricci was officially inaugurated in 2001, after the restoration of the Renaissance palace that houses it and from which its name is taken. It is the first German musical institution in Italy.

The project originates from an agreement between the Municipal Administration of Montepulciano and the Hochschule für Musik und Tanz Köln and is supported by the generous help of private sponsors who founded the Palazzo Ricci Association and guarantee its financial basis.

In collaboration with international teachers, the Academy offers around 50 master classes and laboratories each year, attended by numerous young musicians from all over the world. It also organizes a season of concerts with the most talented students and their teachers in the frescoed hall of Palazzo Ricci. It also hosts study and group meetings of partner organizations and an Artists in Residence program.

After the series of the International Week of European Conservatories from 2007-2011, the International Chamber Music Week under the direction of Ariadne Daskalakis between 2012-2018, and the festivals for the 5th, 10th and 15th Anniversary of the Academy (2006, 2011 and 2016) of which the last one dedicated to the music of Hans Werner Henze and Luigi Nono, the Palazzo Ricci Association gladly celebrated the restoration of the second floor of the building in 2017, which provides ten new classrooms used for lessons and seminar.

In 2020 the Academy of Palazzo Ricci is there! and offer some concerts in August and September. 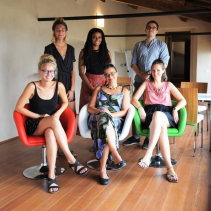 To apply for this job please visit palazzoricci.com.